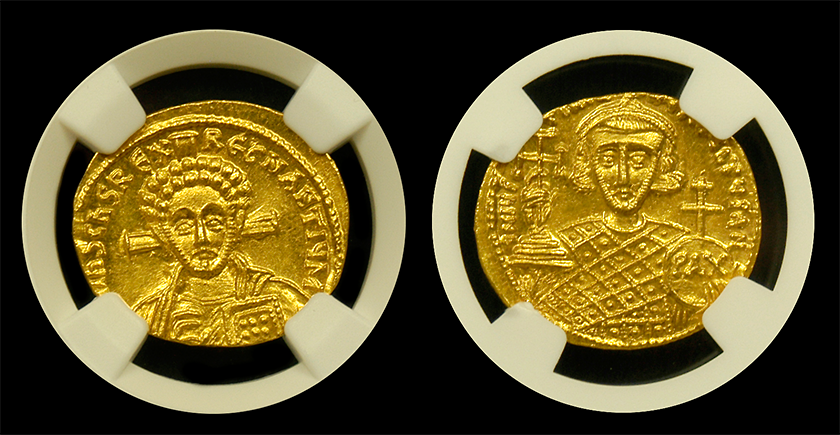 Struck between 705-711 A.D., this spectacular gold coin was issued during the second reign of Justinian II.  It is the second depiction of Christ on a coin and is highly desirable as a result.  This coin often comes very softly struck, however, this particular example is razor-sharp with remarkable detail on both sides of the coin. In fact, Gem Mint State is the highest grade awarded by NGC Ancients making this the finest known certified example available in the world today.

The obverse depicts a youthful portrait of Christ holding the scripture with a cross behind his head.  The reverse depicts Justinian wearing a crown and in one hand holding a globe with the word “pax” or peace.  In the other hand he holds a cross.

We typically encounter these coins in lower grades, this particular example is noteworthy and very desirable.

The Byzantine Era, which spanned from 330 AD – 1453, was a tumultuous period in human history. During this turbulent time there was a rapid expansion of Christianity across broader Europe. It was the only organized state west of China and into Central Europe to survive without interruption from ancient times until the beginning of the modern age. 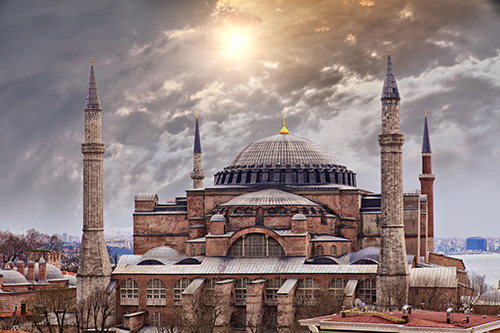 During most of its existence, the Byzantine Empire was the most powerful economic, cultural, and military force in Europe and as time went on there were several cycles of economic decline and recovery. A religious revolution was also in its infancy as Christianity began to take hold.

The Byzantine Era witnessed a transition from Roman Polytheism (the belief in many different gods like Zeus and Athena) to Christianity. Coinage during this time frame is highly desirable, particularly examples struck in gold that have been preserved in high grades. Today these interesting coins referred to as gold Solidus’, offer a nice combination of historical significance, beauty, and a relatively high gold content.

As with earlier Roman coins, the early Byzantine coins followed the late Roman conventions of showing the head of the Emperor on the obverse side, except now full face rather than in profile. On the reverse side there would usually be a Christian symbol such as the cross or an angel.

By the time Justinian II became emperor he started putting the bust of Christ on the obverse and switched to a half or full-length portrait of the Emperor to the reverse. Christianity increasingly spread throughout the Eastern Roman (Byzantine) Empire however, a notable change started to occur in 695 AD, with a government led iconoclasm that began destroying religious icons and monuments with religious or political motives.

It is generally believed that the iconoclasm was in some ways motivated theologically by an Old Covenant interpretation of The Ten Commandments, which forbade the making and worshiping of “graven images.” Debates were triggered and changes in Orthodox worship reflected the major social and political upheavals of the seventh century Byzantine Empire.

Another reason for the iconoclasm was because Caliph Abd al-Malik stopped his earlier adoption of Byzantine coin types and decided to use purely Islamic coinage with lettering only.

Iconoclastic riots took place all the way into Zürich, Copenhagen, Munster, Geneva, Augsburg, Scotland, and most of today’s Northern Europe. Soon a political and economic division occurred in Byzantine society. Iconoclasm was generally supported by the Eastern, poorer, non-Greek peoples of the Empire who constantly dealt with Arab raids. The wealthier Greeks of Constantinople as well as the peoples of the Balkan and Italian provinces were the ones to strongly opposed Iconoclasm.

As time went by Byzantine coins became thinner and wider to the point that they became as thin as wafers, and could even be bent by hand. Even though changes were dramatic and chaotic, Byzantine coinage lasted until the end with full-faced ruler portraits once again adorning the obverse like they did in the beginning of the great Byzantine Empire.