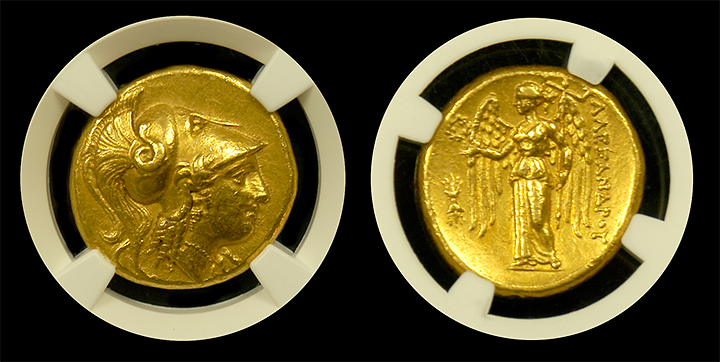 This incredible Alexander The Great coin was struck 336-323 B.C. and contains 8.61 grams of gold

This high quality example, for sale here,  is simply phenomenal and is one of the most famous of all ancient gold coins.

Alexander the Great was without question one of the most notable figures of ancient history. Under Alexander’s thirteen year reign are incredibly desirable coins that today are nothing more than works of art. Even many years after Alexander’s death he was so beloved that his generals who continued to rule his once great empire continued to produce coins to commemorate The Great Alexander. Some of them even used Alexander’s likeness on their coins!

Those that we can find today… particularly those in mint condition… are rare and most desirable. This is because most coin survivors today are quite worn. You have to remember that these coins were made with crude methods and were issued over 2,300 years ago. Also, it is important to know that they were widely circulated. Money in Alexander’s day not only functioned as currency, but also as propaganda to show all the territories that were conquered who their new ruler was.

Those coins, like the one featured here in mint condition, were probably hoarded or stashed away to remain hidden in such perfect condition. Just looking at these beauties you can understand why someone would want to hold on to them instead of using them on a day to day basis.

Want to find out more about Ancient Coins?  Just send us your questions and we will send you our Free Ancient Coins Buyer’s Guide!